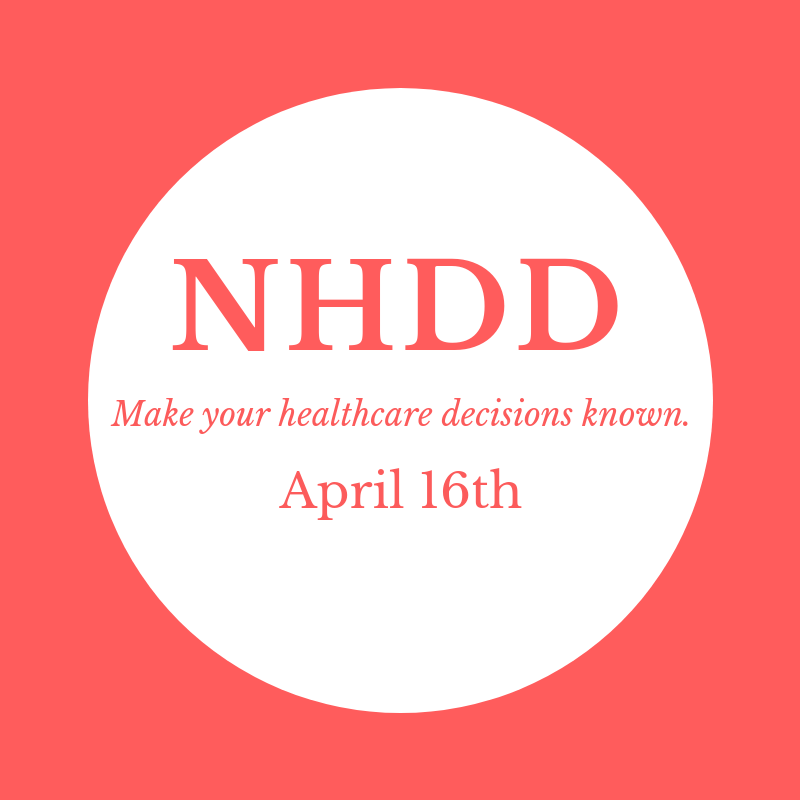 National Healthcare Decisions Day: Get Inspired and Get Involved!

Looking for inspiration from others as you plan for National Healthcare Decisions Day? Check out the ideas below. We’ve compiled a list of  ideas from community members, coast-to-coast, who shared with us what they were planning for NHDD 2018. Or, listen to the recording and/or access the slides from The Conversation Project’s past community calls about NHDD to learn more on what groups are doing to promote NHDD.

Run a targeted educational series or use a broader social media approach: One hospice in Arizona planned to run a three-day collaborative educational campaign for community healthcare professionals. A hospital in New Jersey planned an 8-week community series on Advance Care Planning (ACP), including hosting an author discussion and 2 CEU programs for hospital and long term care social workers. One hospice in Hawaii noted they would run a social media campaign to promote awareness and hold at least one session on ACP for a local healthcare facility or church. A state government health agency in Washington planned a series of workshops, a collaboration to develop a Governor’s Proclamation for NHDD, and a newsletter that would reach tens of thousands of long term care clients. A healthcare industry association in Arizona planned to ask their staff and board of directors to fill out their directives, and will share those photos on social media. They also are considering hosting a twitter chat. They also plan to make sure their staff members and hospital members lead by example and complete their own Advance Directives.

Coordinate with those already doing ACP work in your community or tap into community groups where you already have a (non-ACP) connection: One organization in Pennsylvania was considering a collaborative initiative with local community partners. Another noted while she wasn’t running something herself, she planned to share NHDD information, resources, and ideas with local healthcare organizations she worked with. One community member in Illinois noted she was on the Board of a local domestic violence shelter and planned to connect with them about conversations and importance of Advanced Directives for victims of domestic violence that are married to their abuser. Several other community members noted they would host one-time events targeting a specific group they were tied to in the community, such as a retirement center or faith congregation.

Work with financial and legal advisors in your community:  One community member in Tennessee noted she would speak at an April 16th event hosted by a trust attorney, an elder care law attorney & a financial adviser for approximately 50-100 clients and prospects.

Bring information to employees in your organization:  One healthcare organization in Arizona noted they would host Conversations with staff over breakfast and run a workshop for staff with information on Advanced Care Planning. Another healthcare system in Georgia planned to conduct a follow-up survey of staff to see if the percent having Advance Directives (ADs) has increased since their past NHDD efforts. They planned to host sessions for chaplains to stop in, obtain information and get assistance for completing their own ADs.  They also planned to write an article in their communications to physicians about how they can bill for advance care planning. Lastly, they planned to expand their reach to other county/city employees by having advance directive information at county/city health fairs. A healthcare insurance plan in Massachusetts planned internal employee educational sessions, focusing on defining the medical terminology and advance care planning documents to get employees informed. A health care system in Michigan planned to have ‘tables’ at their eight hospitals to distribute ACP documents; information gleaned from The Conversation Project resources will be on their intra- and internet sites and also in their employee newsletters.

Go Big! Set a community-wide goal and create events across multiple sites in your region: Last year, one healthcare system in North Carolina set a goal of reaching 1,000 individuals and having 200 ADs completed (up from 151 ADs competed last year!). They planned to host a community event to launch their week of activities and kick off the week with a story from an employee, that would reach 65,000 employees in their system via intranet banner  Throughout the week, they planned to host over 25 event sites across the region. One community member in Illinois noted her organization was trying to expand their typical community reach by sponsoring a multi-day public art project around Chicago, engaging residents with a question like “How do you wish to live well at the end of life” and having graphic facilitators/cartoonists depict the city’s vision of “living well.”  She was hopeful that would spark social media engagement among participants, and help with trying to get a resolution passed in the Chicago City Council. Another organization decided to have a NHDD be their year-long mission. They planned to launch and educate their staff mid -March, having a celebration around the launch and then develop a healthcare CME education program. A Regional Health District partnership in Iowa planned on running presentations for their community on April 16, featuring the two hospice/palliative care physicians from two hospitals. This would be followed by an optional table top workshop on completing advance directives. This group also hosted three presentations in the last 3 months of 2017, produced a video and provided information on their website using Conversation Project and Canadian Speak Up resources. They also have a community group of clerical, legal, medical, and educational leaders coordinating activities.

Start Small! NHDD starts with You: One community member noted she received encouragement on ‘walking the talk’ on The Conversation Project (TCP)’s NHDD community call and committed to completing her own advance directive and helping her family members to do the same.  Another community member planned on running an article in her local newspaper. And, another community member in Rhode Island planned to present various resources to a local leisure learning group she was part of and lead a group discussion. You don’t have to go big, one conversation can start a spark!

What are you doing or thinking of doing for NHDD?  Tell us here!