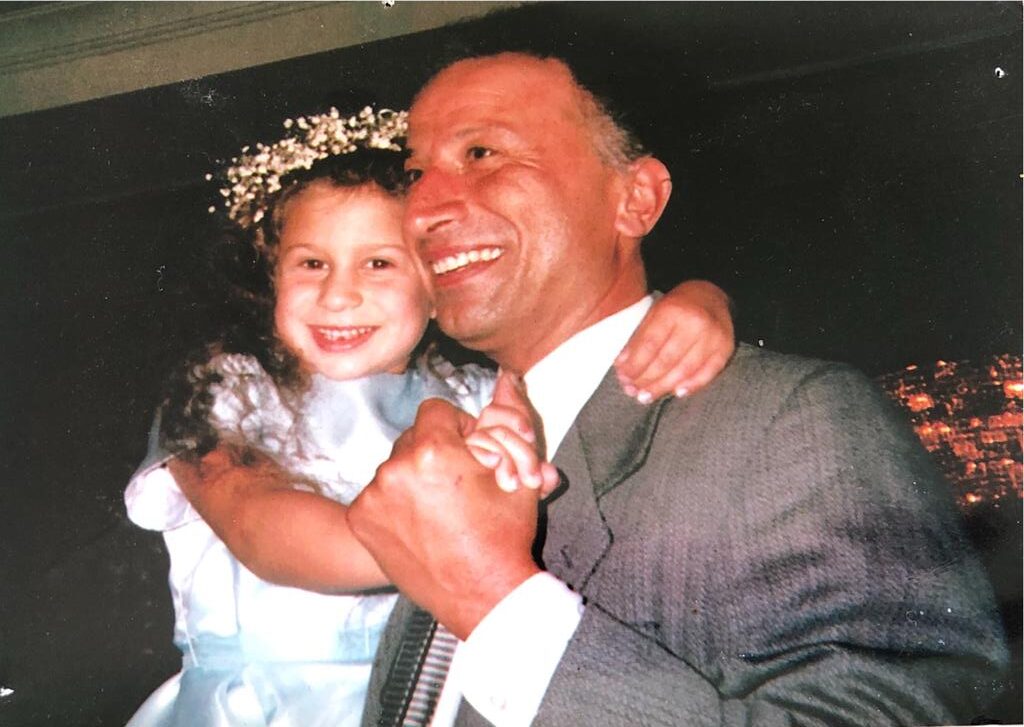 Grieving Beneath the Stars: Mourners as Spiritual Teachers

When I heard my dad was dead, there was a breaking—a shattering inside of me that felt so violent I could almost hear it. I woke up to a knock on my front door in the middle of the night, and sat up in bed, sure something was wrong. It was my older brother. He said he had bad news. “Really bad.” And then the words left his mouth: “Dad had a heart attack, and unfortunately, he passed away.” Like a bone breaking: Sharp pain, dizziness, disbelief. I couldn’t catch my breath for hours.

My dad had been healthy, thriving, just 66 years old. I had texted him the day before. We had a dinner date planned for that week. “How could he possibly be dead?” I thought.

There is a Buddhist story about a monk being followed by a lion in the woods. He notices the animal trailing him and walks a bit faster.

I used to think really bad things could only happen to other people. It sounds absurd, obnoxious. It only really works if it is secret, when you don’t even fully admit it to yourself. But it was there. I would read awful stories in the newspaper and think, somewhere in the back of my mind, “That won’t happen to me.”

I come by this kind of blind—and blinding—optimism honestly. It’s my dad’s fault, really. He was no stranger to hardship: he immigrated from Iran to the U.S. alone at 16, and spent his school breaks sleeping outside during the day and roaming the streets at night so he didn’t have to pay for a room. As an adult, he became an entrepreneur, and saw his businesses flourish and also crash and burn. But he believed in the power of framing, even at the expense of truthfulness. His mother—my grandmother—also traded in this kind of strategic denial; she’d come back from her doctor’s appointments to report, in a thick Iraqi accent, the same news as last time: her health, the doctor had said, was “excellent.” Her children would raise their eyebrows but she held firm, even on the day she died. “Excellent.”

In the Buddhist story, the lion gets closer and closer, until the monk breaks into a full run. He dashes through the forest, terrified, looking for cover. He comes up to a cliff.

When my dad died, these illusions did too: Anything could happen to me. Every second felt like the moment before a potential collapse. What was to stop the universe from taking my brothers too? Or me? Well, nothing, actually, when I considered it seriously. Running underneath all my daily tasks grew a subtle fear, a low-grade feeling of free fall. I felt it at the grocery store, walking to the mailbox, laying in bed at night.

Before my dad’s death, I had these recitations posted on my fridge, there to greet all our house guests as they reached for a beer. After my dad died, I quietly removed them. I didn’t need reminding. I remembered.

The monk, fleeing from the lion, trips over the edge of the cliff, but manages to grab hold of a vine on the way down. He feels its tenuousness, swinging in the air, and looks up to see the eyes of the lion, fixated on him from the ledge above. Below, at the bottom of the ravine, two other lions wait for him to fall, licking their lips. A mouse starts nibbling on the top of vine. It begins to fray.

But then time passed, and the truth of death in any moment faded from view. I knew it and I didn’t. I got used to going to the grocery store again, assuming my husband would come home from work, believing, on some level, that everything was stable, solid, reliable. The question, though, was never fully settled: how to be wide awake to the truth of our precariousness, and also unafraid?

I sought some clarity by putting myself in constant proximity with people who are in free fall, and know it: I began working as a hospital chaplain, where I sat with people who were ill and dying. Each patient’s door I knocked on was its own world: a young mom who’d lost her infant son, speaking a sort of incantation of deep love for him; an elderly husband stroking his wife’s hair, simply present in her last moments; a middle-aged son, crying a string of sweet, never-before-felt “thank yous” to his mother’s body. Every day, I was witness to immense, earth-shattering grief, and to immense, earth-shaking wisdom. I still don’t have clear answers to my question. But I am living more honestly inside the paradox.

I do know that to grieve is a courageous act. Chaplains are sometimes seen as “helpers” or even “fixers” for spiritual crises, but I saw myself as a student, sitting at the feet of the real masters. Our death-denying culture insists that we look away from mortality, look away from pain. But grief means being with things the way they are. It means seeing the beauty and heartbreak of living and dying up close. It means tasting the moment, just as it is. Mourners are awake.

As the vine begins to fray, the monk’s eyes catch on the red of a strawberry growing on the cliffside. He reaches for it with his free arm, plucks it off the vine, and puts it in his mouth. He tastes it: it is so sweet.

A few weeks before my dad died, he gifted me a small planetarium as a Hanukah present. Inside his characteristically messy packaging was a small black plastic orb with tiny holes along the surface that projected stars onto the ceiling. Given that I was 26 years old, I thought for a minute it might somehow be a gag––my dad loved giving gag gifts, those ones that change a person’s face from anticipatory gratitude to surprised laughter––but the note made its sincerity clear:

When you were little, you loved

a planetarium I got you. This

is to find out if you still do.

I’d forgotten about that planetarium he’d gotten me when I was little, how I’d roll off my bottom bunk onto the bedroom floor to switch it on and stare up at the solar system. On his birthday this year, four years after his passing, I fished it out of my closet, put it in the center of my bedroom, and switched it on late at night. I lay on my back and watched the black ceiling light up like the night sky. Fractures to our defenses aren’t always bad. That’s the way the planetarium works, at least. Holes for stars.

Chloe Zelkha is a leader in the COVID Grief Network, an initiative offering free grief support and community connection to young adults grieving the illness or death of someone with COVID-19. She was trained as a chaplain at UCSF Medical Center, and holds an Ed.M. from Harvard, where she studied what transformative experiences are made of.