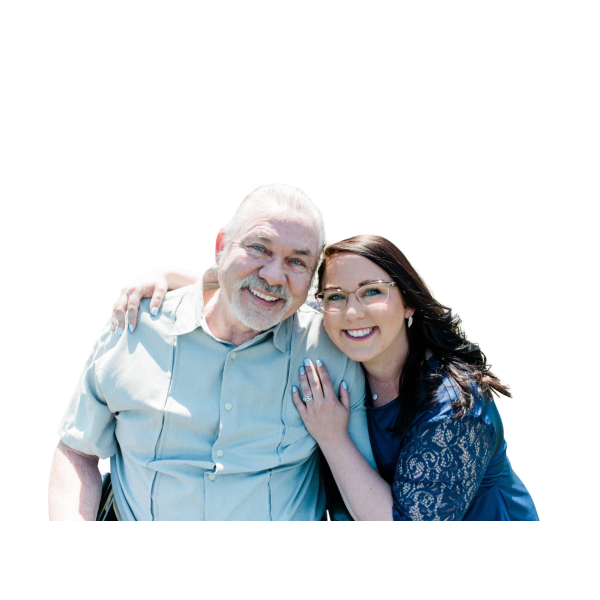 ALS became a social media trend in 2014 with the Ice Bucket Challenge. A viral trend that, to be honest, I saw and thought nothing much of because, like with most viral trends, I never thought it would affect my family.

In 2017 we would hear those three letters again when my dad, who I most often refer to as Ton, was diagnosed. Currently, ALS (amyotrophic lateral sclerosis, also called Lou Gehrig’s disease) is a terminal disease. Most patients are unfortunately told to go home, get their affairs in order, and wait.

Everyone with ALS progresses at a different rate. We knew that his body was failing him from the inside out and that one day his voice would no longer be able to communicate with us. While there is technology to assist, we knew he would be too stubborn to use that for an in-depth conversation.

For our family, we wanted Ton to know right away that he had the final say, and we were going to have a family motto during our ALS journey: “Ton’s Way or the Highway.” My mom, brother, and I just asked that he would hear out our side before anything was decided.

We explained our motto to the extended family as well. My dad was one of eight children and had an extremely close relationship with his extended family. Allowing them to know how we would handle things inside the home made it easier to have conversations. The extended family knew that at the end of the day, whether or not anyone agreed with what decision was made, they could either respect Ton’s way or excuse themselves.

While we had a great system of handling the decisions, the most challenging part was how to bring up the topics. The best way to have conversations is to start.

Similar to the way ALS progresses, conversations will happen at a different rate for everyone. Still, the important thing is to talk, to know and not wonder, and to take time with the deeper “read between the line” moments that happen when you start.

For example, in one conversation, we were trying to relay to my dad the benefits of hospice.

My dad’s dad passed away in 1999. My grandfather, much like my dad, had not want to leave his home. At the time, you had to be cared for outside of your home to receive hospice care. He passed before they came to get him. The memory of that stuck with my dad for years.

Hospice has changed a lot since 1999, and while my mom and I were researching, scheduling, and preparing, we assumed my dad knew that.

Not until he tearfully looked up and asked, “When do they come to pick me up?” did we realize he still believed that hospice was only available outside the home.

I was devastated as I realized he had been sitting there thinking we were not honoring his wish to stay home, and we were trying to sell him on this idea of care as if it were a timeshare in the Bahamas.

At that moment, though, we all realized that we were not on the same page. We needed to prepare for our conversations to ensure we knew where everyone was coming from, what the care options would look like, and how past experiences and prior knowledge might affect us.

Ton and I always enjoyed a conversation and spent most of our days on FaceTime or the phone discussing the most random topics. We both did not like feeling like we were caught off guard when a topic was brought up that we did not feel prepared to discuss. When placed in that situation, we were both the type to get defensive and shut down.

We hoped that picking a date and topic to have a conversation would give everyone involved time to mentally and emotionally prepare for diving deep into what mattered most within that topic. Since it gave us all time to be in a clear headspace and mentally and emotionally ready for the conversation, we would go deeper into it than I think any of us would have otherwise.

Knowing time was not on our side, and that at any moment his ability to speak for himself would disappear, we needed to understand what mattered most. For Ton, his wishes and values came down to two things: awareness that his experience was personal and individual, and unity and support among his family members.

Another common theme was unity. Ton did not want anyone to go through any of this alone, and he found comfort in knowing his family would be together, have each other, and support each other for years to come.

When we learned about his true wishes and his values, we realized that we could fill in the puzzle pieces on his behalf if needed. Knowing what he thought helped us to speak to his medical professionals on his behalf. It gave us comfort when advocating, knowing we were respecting what mattered.

We were able to learn so much. As a family, we learned about what made him laugh, silly stories from childhood. We learned how his pet peeves got started, and why grudges are not worth holding on to. We learned that family has many definitions. We learned to support those that you love.