About Us > Otile McManus 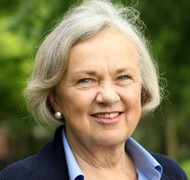 “I was 21 when my 19-year-old sister was struck and killed by a drunk driver. That was more than 40 years ago.”

I was 21 when my 19-year-old sister was struck and killed by a drunk driver. That was more than 40 years ago. Through the shattering grief that ensued, it became clear to me — and ultimately healing for me — to discover that every death is at once singular and universal. Each of us experiences the loss of a loved one on our own because no one else can understand precisely what we have lost as individuals. No one can know the heart and soul of a deep and profound one-on-one relationship with a sister, brother, mother, father, child. Yet each singular loss connects us to universal human loss, to all others who have suffered and grieved a death, from the very beginning of time. Ever since, there has always been comfort in this for me.

After ten days of confinement at a Boston teaching hospital for various ailments, my mother finally reached the end of the line.

Although no sudden or untimely death like my sister’s can be called a “good” death, I believe there is also comfort to be found when death and dying are experienced as a natural part of life and living, not hidden away or talked about euphemistically in hushed tones so the children won’t hear. I can remember my father explaining how his Irish family “waked” the dead in the parlor for all to bear witness. A faithful Catholic himself, he told me that when he knelt by the bed every night to say his prayers, he always included the one “for the grace of a happy death.” At age 71, he had a fatal stroke while putting another log on the fire during his ritual cocktail hour with my mother. Although losing him was painful, I felt blessed that he could put words to what he wanted when the time came.

Yes, there is — or can be — an inherent grace in death if we are willing to acknowledge it, to honor it and to talk about it. I was also blessed that my mother faced her mortality squarely. After she turned 90, her physical frailties were debilitating while her mind remained as sharp as ever. Occasionally this one-time New Yorker would turn to me and say: “I’m ready to get off the bus.” And I would answer: “Just a few more stops, Mom.”

After ten days of confinement at a Boston teaching hospital for various ailments, my mother finally reached the end of the line. Although she enjoyed nothing more than being the center of attention, she dismissed the residents who crowded around her during morning rounds. “I’m done,” she said, telling a palliative care doctor that she was ready to transfer to one of the few residential hospices in the metropolitan area. For six weeks, she held court in a lovely private room where family and friends came to reminisce and say goodbye. She celebrated her 93rd birthday with candles and all five grandchildren in attendance. Nine days later, she died quietly and peacefully after one of those grandchildren spent the evening reading her passages from love letters my father had sent during World War II.

Would that death could be like this for me and those I love.

Otile McManus is a communications consultant with expertise in community outreach and strategic planning. Most recently, she served as Director of Special Projects at Corcoran Jennison Companies, a Boston-based developer specializing in mixed-income housing.   An advisor on several book projects, McManus also worked at The Boston Globe in a number of capacities including reporter, editor and member of the newspaper’s editorial board. A founding member of The Conversation Project, McManus received her BA from Wells College and was a Loeb Fellow at Harvard University’s Graduate School of Design.