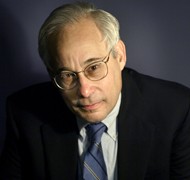 “I ended my speech by asking the audience to join me in a pledge, on behalf of my father, to do everything we could to make sure that others would not suffer as he had”

For 42 years, my father provided care as a general practitioner to a population of farmers, laborers, and their families in the tiny Connecticut town in which I grew up. He is the guy who got up in the middle of the night to drive out to the Barker farm because Jimmy had a high fever. I would become half awake at the sound of his car starting in the driveway, but I would not know why until the next morning, when I heard about Jimmy’s fever or Mr. Streeter’s heart attack or the awful car accident at the drawbridge.

Not long after my father retired, he began developing symptoms of Parkinson’s disease and mild dementia from small, multiple strokes. He remained alert and took joy in his grandchildren, but became progressively weaker, until one day he fell and broke his hip. His housekeeper found him and called the ambulance. One of my brothers, who lives an hour from our father’s home, rushed to the local hospital to meet him in the emergency room. There he asked for my father. He was told, in error, that our father was not there. Panicked phone calls followed as my brother searched anxiously for our father, until finally someone told him that our father was there after all and was about to be wheeled to the operating room.

After surgery, my father lay sedated on a special mattress containing sections that alternately inflated and deflated. Within a week he had a deep pressure ulcer on his right heel. It was painful and interrupted his early ambulation therapy. He became restricted to a wheelchair for most of the day and gradually refused to walk at all.

Unable to return home, my father needed to go to a rehabilitation facility, and my brothers and I searched hard for the best one. We interviewed visiting nurses, physical therapists, and local doctors—and the signals pointed to a facility twenty miles from his home. It was the best place of its kind around. I visited him there on the morning after his admission. He was lying stuporous in the bed, on his back, with his ulcerated heel pressing into the sheets. His mouth was hanging open and his eyes were rolled back into his head. I asked the nurse for an explanation. “We sedated him,” she said. “He was combative. He hit a staff member.” For ten years my father had had severe Parkinson’s disease, and for most of that time he was unable to extend his own arm voluntarily, much less throw a roundhouse punch. My father had undoubtedly been angry, yes. But a punch—no. I demanded that the sedation be stopped.

Not that it mattered much. For reasons that never became clear, his Parkinson’s medication, meticulously adjusted for two years by his physician at home, was stopped summarily when he was admitted to the rehabilitation facility. This resulted in a two-week siege of spasms and much decreased mobility.

Not that that mattered much, either. By then the pressure sore on his right heel had opened again, causing pain that prevented him from walking or even spending much time in a wheelchair.

Not that it mattered, because when my brothers and I asked that our father be placed in a wheelchair whenever possible, the weekend shift of nurses told us that no wheelchairs could be found. They asked that we bring in his rickety old wheelchair from home. They eventually did find a wheelchair, but it was missing the footrest plate that would have protected his injured heel from bruising.

My father spent six weeks in the rehabilitation facility and then gave up, as did the staff. He returned home to a hospital bed and around-the-clock housekeeper coverage. Two weeks after he got home—almost entirely bedridden and almost certainly never to walk again—a wheelchair finally came: the latest model, with postural supports, custom back rests, and hand controls he could never use. We never asked for it; the home care company simply ordered it. The price: $6,000. It sat proudly and nearly unused in the corner of his bedroom.

I told that story at IHI’s National Forum in 1994—18 years ago. I ended my speech by asking the audience to join me in a pledge, on behalf of my father, to do everything we could to make sure that others would not suffer as he had. I salute and support The Conversation Project as part of that pledge.

Donald M. Berwick, MD, MPP, FRCP founded the Institute for Healthcare Improvement (IHI), where he was President and CEO for nearly 20 years. He was formerly Clinical Professor of Pediatrics and Health Care Policy at the Harvard Medical School, and Professor in the Department of Health Policy and Management at the Harvard School of Public Health. Dr. Berwick has served as vice chair of the US Preventive Services Task Force, the first “independent member” of the American Hospital Association Board of Trustees, and chair of the National Advisory Council of the Agency for Healthcare Research and Quality. An elected member of the Institute of Medicine (IOM), Dr. Berwick served two terms on the IOM’s governing Council and was a member of the IOM’s Global Health Board. He served on President Clinton’s Advisory Commission on Consumer Protection and Quality in the Healthcare Industry. In 2010 President Obama appointed Dr. Berwick to serve as the Administrator of the Centers for Medicare and Medicaid Services. He is a recipient of several awards and author of numerous articles and books, including Curing Health Care and Escape Fire.