About Us > Atul Gawande, MD 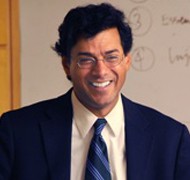 Recently, while seeing a patient in an intensive-care unit at my hospital, I stopped to talk with the critical-care physician on duty, someone I’d known since college. “I’m running a warehouse for the dying,” she said bleakly.

Out of the ten patients in her unit, she said, only two were likely to leave the hospital for any length of time. More typical was an almost eighty-year-old woman at the end of her life, with irreversible congestive heart failure, who was in the I.C.U. for the second time in three weeks, drugged to oblivion, and tubed in most natural orifices (and a few artificial ones).

Another woman, in her eighties, with end-stage respiratory and kidney failure, had been in the unit for two weeks. Her husband had died after a long illness, with a feeding tube and a tracheotomy, and she had mentioned that she didn’t want to die that way. But her children couldn’t let her go, and asked to proceed with the placement of various devices: a permanent tracheotomy, a feeding tube, and a dialysis catheter. So now she just lay there tethered to her pumps, drifting in and out of consciousness.

Almost all these patients had known, for some time, that they had a terminal condition. Yet they-along with their families and doctors-were unprepared for the final stage. “We are having more conversation now about what patients want for the end of their life, by far, than they have had in all their lives to this point,” my friend said. “The problem is that’s way too late.”

Spending one’s final days in an I.C.U. because of terminal illness is for most people a kind of failure. You lie on a ventilator, your every organ shutting down, your mind teetering on delirium and permanently beyond realizing that you will never leave this borrowed, fluorescent place. The end comes with no chance for you to have said goodbye or “It’s O.K.” or “I’m sorry” or “I love you.”

People have concerns besides simply prolonging their lives. Surveys of patients with terminal illness find that their top priorities include, in addition to avoiding suffering, being with family, having the touch of others, being mentally aware, and not becoming a burden to others. Our system of technological medical care has utterly failed to meet these needs, and the cost of this failure is measured in far more than dollars. The hard question we face, then, is not how we can afford this system’s expense. It is how we can build a health-care system that will actually help dying patients achieve what’s most important to them at the end of their lives.

Atul Gawande is a surgeon, writer, and public health researcher. He practices general and endocrine surgery at Brigham and Women’s Hospital in Boston. He is also Professor of Surgery at Harvard Medical School and Professor in the Department of Health Policy and Management at the Harvard School of Public Health. He has been a staff writer for The New Yorker since 1998. He has written three best-selling books: “Complications,” which was a finalist for the National Book Award in 2002; “Better,” which was selected as one of the ten best books of 2007 by Amazon.com; and “The Checklist Manifesto.” He has won two National Magazine Awards, AcademyHealth’s Impact Award for the highest research impact on health care, and a MacArthur Fellowship, and he has been named one of the hundred most influential thinkers by Foreign Policy and Time.