About Us > Liz Walker 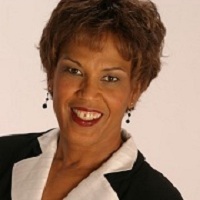 “She looked me straight in the eye and said, ‘All I want is to stay in my house.’ I knew then I would do everything I could to honor her request.”

My mother, Bessie died when I was born.  As I grew up I always thought I had a rather advanced perspective on death, until 40 years later when my stepmother Geneva was diagnosed simultaneously with breast cancer and dementia. She was 83. When her doctor in our hometown of Little Rock discovered her cancer, I insisted she come to Boston for a second opinion.  I took her to Brigham and Women’s  Hospital where we learned she was being attacked on two fronts.  One doctor reported her breast cancer was advanced and would have to be treated aggressively. Another doctor said there was very little we could do about her mind.

I’ll never forget the ride home from the hospital that day.  My mind was buzzing with all the things we would have to do; close up her home, move her to Boston, find a caretaker who could move into my home.  Fortunately I made a good living as a television news reporter and lived in a house big enough for her stay. I was so caught up in my ‘to do’ list, at first I didn’t hear her so she raised her voice “I said I don’t want surgery.  I don’t want to stay here. I want to go home.”  I was in shock.  How could she possibly not want treatment that could add years to her life?  Maybe this was the dementia.  After what seemed like a day long drive down Brookline Avenue to Route Nine, I pushed back “You don’t know what you are saying…” Our conversation went down hill from there.

Growing up, I never got along with my stepmother.  My father died when my brother and I were teenagers and Geneva dealt with our hormonal rages, mood swings and adolescent anxieties with the only resources she had, heavy discipline and her faith.  I was resistant to both and let her know it as often as I could.  Mercifully she hung in there with my brother and me and now that I had married into my own merged family, inheriting two stepchildren, I was learning to see Geneva with new eyes.  I owed her and I didn’t want to lose her.  My children were just getting to know her. Nik was only three.  How could she just give up and not fight for her life?

I don’t remember how we ended up in the Gerontologist’s office or his name, but looking back, it had to be divine intervention; the appointment was set the day before I was to accompany Geneva back to Little Rock.  Nothing had been resolved and she was as determined to go home as I was determined to somehow force her to stay until she agreed to undergo surgery.  She walked into that office steeled for another battle.  For the first time, I noticed her energy was waning.  She had used most of it arguing with me. The doctor, a kind and gentle young man relieved the tension as soon as we sat down.  He spoke to Geneva with a compassion and respect that seemed to give her more vigor and spirit. After he asked her how she felt, he asked respectfully if I would leave the room.  I realized as I got up that this was the best thing that had happened to us.  We needed intervention, a calmer more objective voice.  We were no longer hearing each other.

Later on in a phone conversation, the doctor told me Geneva was well aware that she was dying and she knew her mind was slipping away.  She wasn’t particularly afraid of either but she wanted to keep as much control of her life as she could. Once again she was relying on her faith and that was more important to her than anything, even dying.  My job was to decide how I could help her maintain that dignity.   The phone conversation was my epiphany.   The burden had been taken off of me.  She didn’t expect or want me to save her.  The choice had never really been mine to make.

On the plane ride back to Little Rock, I apologized to Momma.  I told her the truth…I didn’t want her to die.  She quietly told me it wasn’t that she wanted to die but she was sure she didn’t want surgery.  She was 83 years old. She had lived longer than both her parents and her husband.  It had been a good life. She didn’t want hospital tubes and strangers handling her breasts.  She didn’t want to be cut up.  She knew Jesus was with her no matter what.  And then she looked me straight in the eye and said, “All I want is to stay in my house.”  I knew then I would do everything I could to honor her request.

The doctors prescribed tamoxifin which shrank Momma’s tumor for a while.  The dementia took her mind slowly but steadily.  I took a leave from Channel Four and stayed with her for a while to help her take care of her affairs and get her settled.  It was surreal.  Sometimes she was as sharp as a whip, just like the woman who took care of us those many years.  And in the next moment, she would become anxious and frightened, not knowing where we were or what we were doing.  Eventually we hired a fulltime caretaker and I traveled back and forth on weekends.  She lived two more years and in that time, she got a few more chances to see her grandchildren, visit with friends and engage in her favorite pastime, looking out the front bedroom window of her little bungalow on Chester Street..  For the last few months of her life, she stopped talking and there was no way to know how much pain the cancer caused but it was clear that it had consumed her breast. The caretaker wrapped what had become an open wound, as best she could.  The hospice people were called in and I was there the weekend Momma Geneva died.   She was in one of her favorite nightgowns surrounded by family pictures and books that she loved.  That bedroom window was up and if she wanted to, she could have looked out on Chester Street.  Maybe that is the way her spirit left.

Even though I used to brag that I was nothing like Geneva (She was short, I was tall. she was a pious church lady, I was a happy heathen, she wore hats and gloves, I preferred a big afro and bell bottoms,) we were a lot alike, both determined independent women.  It took me a while to realize she had as much right to die that way as she had living way.  And I am grateful that she passed that onto me.

Liz Walker is an award-winning television journalist, a documentary film producer, an entrepreneur and a humanitarian currently working in the war-torn country of Sudan. A 2005 graduate of Harvard Divinity School and an ordained minister in the African Methodist Episcopal Church, Liz has chosen to combine her communication skills with her passion for serving the world. To New Englanders she will always be known as Liz, after 32 years as a television news journalist, nearly 20 of those anchoring WBZ Television’s evening newscasts in Boston. Liz has most recently hosted a special television magazine program called BETTER LIVING WITH LIZ WALKER on WCVB Television in Boston.