About Us > Lachlan Forrow, MD 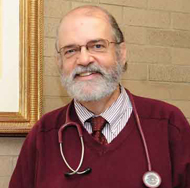 “What if something serious happened, and we didn’t know what you would want the doctors to do?”

When my private cell phone rang that afternoon, I listened in shocked numbness as Mom told me that the EMT’s had just taken my father from home to the hospital after a totally-unexpected cardiac arrest.  Thanks to the EMT’s, he was alive, but what now???

But thanks to Dad, and to my sister Lisa, we all knew what to do.

Only weeks before, on a beautiful Fourth of July weekend, Lisa had gotten us all together on my parents’ screen porch, insisting that we “talk” – about what Mom and Dad would each want, if she and I might have to help doctors make some difficult decisions.  As often as I preach to others about these conversation that “It’s always too early until it’s too late”, I myself had kept putting it off – no rush, one day…

As we started, I asked Mom and Dad together: “What if something serious happened, and we didn’t know what you would want the doctors to do?”  Both were clear.  Dad, despite multiple frustrating and worsening medical problems, still went out to lunch with friends every day – “if something happens, the doctors can try to fix whatever it is, but if that’s not working, they can stop.”  He didn’t spell out in detail exactly what “not working” meant, but it was clear to us – with his strong Christian faith, he wasn’t at all afraid of dying, but if he could enjoy more time with friends and family he would be willing to put up at least briefly with even highly “aggressive” life supporting efforts.  That seemed enough as a start, and we moved on.  “And what about a funeral/memorial service one day?  Are there things you would or wouldn’t want?”  Mom immediately said what we all expected – “private, just family, maybe a few words at the gravesite, nothing more.”  Dad, however, said it was a great question, and he wanted to think about it.

In the days and weeks ahead, planning his own service – “one day, no rush, but it’s good to be prepared” became his main project – tracking down the sheet music for “The Stony Brook School Hymn” and Princeton’s “The Orange and the Black” for the service’s “Prelude”, then the hymns and scripture readings around which the service should be built.

Just days after he finished his “project”, as he lay intubated and completely-unresponsive in the Intensive Care Unit at Greenwich Hospital, and I found myself suddenly back home with Mom and Lisa – and with my brother Derek and sister Katie by phone — everything was obvious.  His doctors told us that even if Dad survived, he would have severe, irreversible brain injuries and would never again be able to enjoy lunch with friends.  So we told them to stop the machines, and Dad died peacefully in his “sleep” the next day, in a quiet hospital room.

Later that week, we all walked into St. Barnabas Episcopal Church, a church he had co-founded in the 1960’s, now filled with the friends he had specifically said he wanted invited.  Bright sunlight provided a rainbow of color across the high stone wall over the altar, in the way Dad had loved so much.  After the Prelude, I got up to read Psalm 8 for Dad, then joined everyone in singing Dad’s choice for the Opening Hymn, “The God of Abraham Praise”, — expressing his hope and firm belief that one day all the descendants of Abraham — Jews, Christians, and Muslims — would figure out how to be together in peace.  The scripture passages he wanted us to hear and reflect on, and additional hymns, followed.

Thanks, Dad.  It was all exactly the way you told us you wanted.  And thanks, Lisa, for getting me/us to ask Dad before it was too late.

Dr. Lachlan Forrow is a general internist and Director of Ethics and Palliative Care Programs at Boston’s Beth Israel Deaconess Medical Center; Associate Professor of Medicine at Harvard Medical School; and President of The Albert Schweitzer Fellowship. In addition, Forrow serves as a Faculty Associate at the Harvard University Program in Ethics and the Professions and is Director of the Ethics Support Service and chair of The Ethics Advisory Committee at Beth Israel Deaconess Medical Center.  He has served as a member of the Harvard Medical School Human Studies Committee, chaired the Human Studies Committee of Harvard Pilgrim Health Care and, since 2000, has served as a member of the Institutional Review Board of the Harvard Cancer Center.  Forrow also served as co-chair of the Expert Panel on End-of-Life Care that released the report Patient-Centered Care and Human Mortality in 2011.