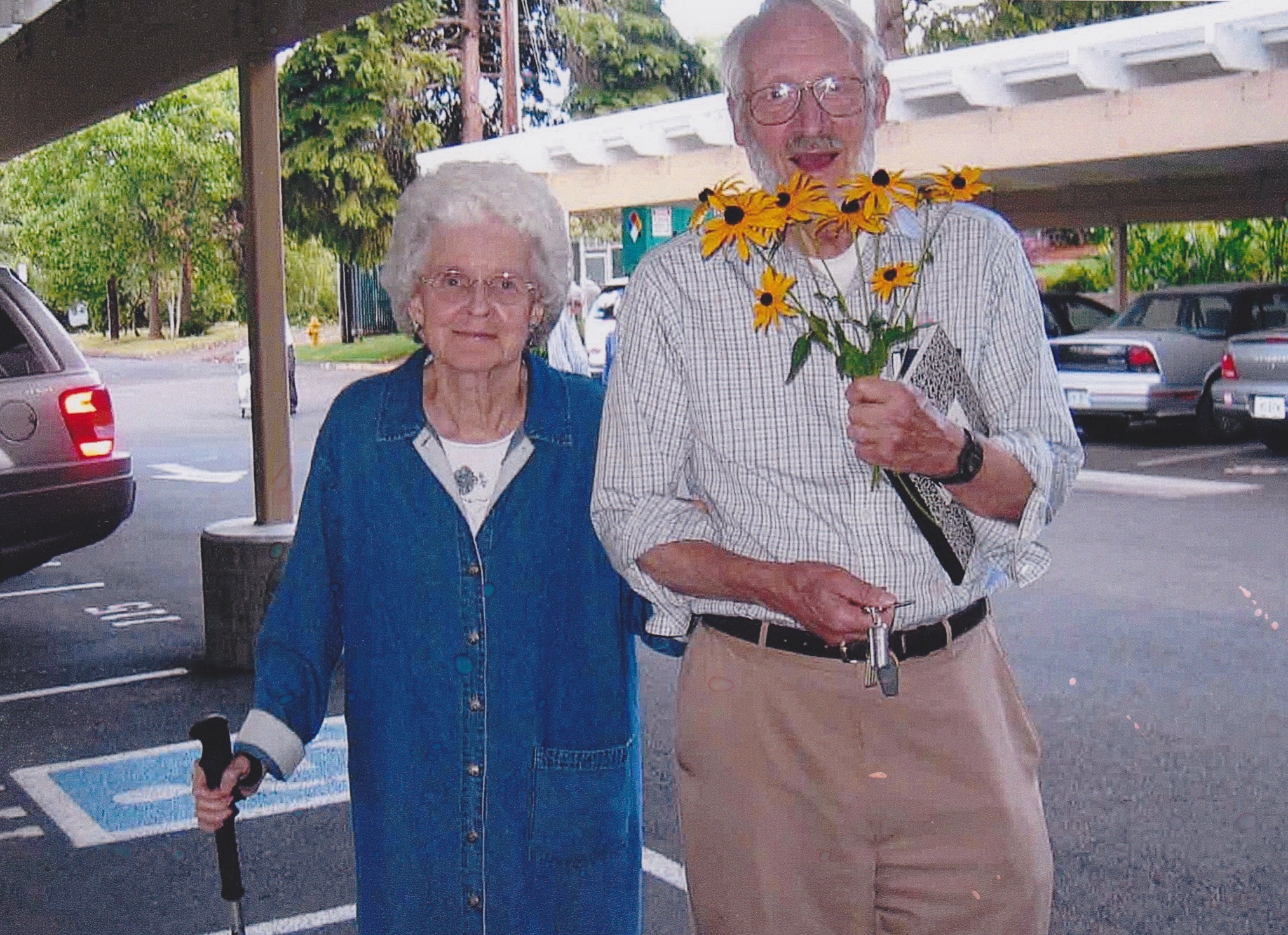 My mother had a horrible death. My mother died after 15 miserable days in an ICU. My mother died with a “crown of thorns” halo, screws bored into her skull, attached to a stiff chest harness that made it yet more difficult for her to breathe.
This is the story I prefer, the better story. My mother had a good death. My mother took her last breath shortly after her PCP, with tears in his eyes, removed the breathing machine that had kept her alive just long enough for her loved ones to gather. My mother died to the sound of music. She died as we sang the songs that accompanied our family road trips and camping adventures more than 40 years before. We had no trouble remembering the words.

This is the story her obituary told, a story of a life well lived. “Ruth Ellen Fenton Bascom of Eugene died Aug. 26 from an automobile accident and stroke at age 84. She was a community activist on behalf of bicycles, libraries, arts, parks and trees. She served as Eugene City Councilor from 1984 and 1992, and Eugene Mayor from 1992 to 1996. Survivors include her husband, retired surgeon John Bascom, 4 daughters, 2 sons and 14 grandchildren.”

This is the story the police report told, a story of the cold, hard facts. “On 8/11/10 at approximately 4:30 p.m. a 2009 Toyota Prius driven by John Bascom, age 85, from Eugene, was southbound on Highway 395 near milepost 56 when he apparently fell asleep. The car traveled across the northbound lane, off the highway and struck several road side boulders and trees.”

This is the story my sister prefers to remember, a story of my mother’s indomitable spirit. Four days before her death, her fractured neck stabilized by a rigid halo, my mother asked for her portable electric piano. We sat her up in the hospital bed and propped her hands on the keyboard. She had enough strength in her fingers to play the song “The Happy Wanderer.”

This is my father’s attempt to tell the story, a story of unresolved grief. His annual Christmas letter (for the first time in 60 years signed “John” not “John and Ruth”) read: “How to write the story of a big loss over the primary colors of the years, and leave the scene free of a shadow? I can’t. Ruth expired after an auto accident in Eastern Oregon in late August. Six children and fourteen grandchildren mix the loss with what life brought and will bring next.”

This is the story her discharge summary told, a story of medical details without context. “The patient was transferred here from another hospital, after an MVA. On day 6, the patient developed atrial fibrillation and a few days later, dysarthria and transient hemiplegia. CT angiogram revealed partial occlusion of her L MCA. Anti-coagulation was contraindicated due to her recent trauma. The following day the patient became obtunded. The family chose to make her comfortable and she died shortly thereafter.”

This is the story I prefer not to remember. My mother had a horrible death. My mother died after 15 miserable days in an ICU. My mother died with a “crown of thorns” halo, screws bored into her skull, attached to a stiff chest harness that made it yet more difficult for her to breathe. She died having endured severe pain from broken ribs, her pain medicine restricted out of concerns for delirium. My mother died having suffered what she described as a “cold wind” every time the CPAP mask was strapped to her face. Her mouth dried out, her lips cracked, and she felt terribly thirsty. However, because of concerns about her swallowing, she was allowed only sips of water and ice chips. And all that suffering was for naught, as she died anyway.

So how did this happen? The secret to getting good end of life care, we are told, is complete an Advance Directive, so that our preferences can be known before a medical crisis occurs. My mother’s Advance Directive, which she completed many years before, stated unambiguously: “IF I am close to death, I want NO life support,” My mother’s Advance Directive proved irrelevant, since the medical history passed from doctor to doctor was not of a dying woman, but of a previously healthy elderly woman who had suffered broken bones in an accident. Her doctors did not consider her close to death.

I knew she was close to death. I knew immediately upon hearing the details of the accident that my mother could not, would not, survive her injuries. My father suffered only bruises. He was protected by his seat belt and air bag. My mother had severe osteoporosis. The seat belt crushed her ribs and the air bag shattered her neck. I knew that there was no way her brittle bones would ever heal. I knew she would die. I just wondered when, and how.

The other recommendation to assure good end of life care is to inform your surrogates of your preferences, so that they may speak on your behalf. I was quite sure that I knew what my mother wanted. I remembered my mother’s distress 20 years before when her own mother’s very specific Advance Directive was ignored at a dementia care center across the country. To my mother’s gratitude and relief, I arranged for my grandmother to be transferred to a hospice in Oregon, where she received care consistent with her wishes and was allowed a peaceful death. Yet, with own my own mother, I felt powerless and did not raise my voice to speak on her behalf. When the surgeon recommended placing a chest tube to drain her hemothorax, I did not say, “Why put her through that? I am quite sure she will die anyway.”

My mother seemed to understand that the recovery story the doctors were telling her was fiction. In a lucid moment a few days before the stroke, she began to plan her funeral. “Pastor Greg,” she said, in the tone of voice she used when she expected to be obeyed, “I want a short memorial service, less than an hour, with more music than words.” Yet she submitted meekly to each burdensome intervention, bowing to the authority of her doctors with silent acquiescence.

I remained mute as well, though I am an experienced palliative care physician. Each day at work I advocate vigorously for patients near the end of life. Yet even when my mother entered the recognizable death spiral known in palliative care as “Weissman’s triad,” (feeding tube, restraints to keep from pulling the tube out, and an oxygen monitor to warn of the onset of the inevitable pneumonia) I could not summon up the courage to challenge her doctors’ authority. I wanted to cry out to her doctors: “Do you not recognize that your best medical technology cannot rescue her tired and broken body? Do you not understand that her overall prognosis is so poor as to make unjustifiable the level of suffering you are asking that she endure?” Instead, I said nothing.

So how did this happen? Why did I remain silent? What the healing passage of time has allowed me to understand is this: our standard approach to end-of-life decision-making places an enormous and unfair burden on patients and families. The standard approach is to first elicit from patients and families their preferences and goals, finding out what patients and families want. But I was not about to say, “My preference is that my mother dies.” Nor was I willing to ask my mother, “Do you want to die?” So instead I said nothing, waiting for someone else to break the taboo and mention the “d” word.

What I realize now is that eliciting goals and preferences is the not the first step in the end-of-life decision making. First, the doctor must recognize that their patient is dying. This can be difficult for any doctor to accept, as it means acknowledging the impotence of medical treatment. It may mean accepting a degree of uncertainty. It is always easier to focus on the possibility that treatment might help. Next, the doctor must communicate this information compassionately and effectively. This can also be difficult, as news of a poor prognosis will inevitably engender some emotional reaction from patients and families, reactions ranging from tears to anger. In my experience, a common reaction is also appreciation for candor and accurate information. Patient and families recognize the difficulty of the task, and have experience with doctors who are frustratingly ambiguous or evasive when asked to be specific about prognosis.

These first two steps in end-of-life decision-making are what I would describe as the doctor “authorizing” dying. First the doctor informs the patient and family that dying is likely, at times inevitable. Next, the doctor describes stopping treatment as a legitimate choice, at times the only wise and realistic choice. Until that happens, patients and families have no real decision making authority. I remember being called to the surgical ICU to speak with a daughter who had specifically asked to meet with palliative care. Her mother had suffered accumulating complications after major surgery. Now 3 weeks post-op, her mother was intubated, and required pressor infusions and CVVH to sustain her life. The daughter was considering asking to discontinue life support, as this was what she believed her mother would want. She had agreed to ongoing life support only because “the surgeons tell me they can make her better, so who am I to say no?” The next day her mother suffered cardiac arrest and initial attempts at resuscitation were unsuccessful. Only then did the surgeons approach the daughter with the option of discontinuing life support.

When I got the call informing me that my mother had suffered a massive stroke, I felt relief. Her dying was now visible for even the surgeons to see. The stroke was the blessing that brought an end to her misery. To this day I wonder, absent the stroke, how much suffering would she have had to endure before I, or one of her doctors, said “enough!”?

The Oscar nominated movie “The life of Pi,” tells the fantastical story of the young boy Pi, his shipwreck and subsequent survival at sea, in a lifeboat, in the company of an adult Bengal tiger. At the conclusion of the movie the adult Pi admits that there may be an alternate version of the story. He briefly tells this alternate story, a story more believable, yet with details almost too horrible to contemplate. And Pi asks his friend, “So which story do you prefer?” His friend replies, “The one with the tiger. That’s the better story.”

I know which story of my mother’s death I prefer to tell. Maybe it’s not the truer story, but it’s the better story. “My mother died to the sound of music. She died as we sang the songs that accompanied our family road trips and camping adventures more than 40 years before. We had no trouble remembering the words.”