About Us > Ruth Wooden 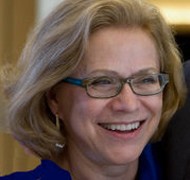 “My siblings and I shared the time together with her and each other — it was her last gift to us.”

For years, my witty mother said that the way she wanted to die was to be “shot by a jealous lover when she was 85.” That was her way of denying that she was going to have one of those much more common “slow declines.” But after she turned 86, she acknowledged that that wasn’t going to happen. As it turns out, right after her 86th birthday, she was diagnosed with Stage III colon cancer. She was operated on and while the cancer had spread to her lymph nodes, the tumor was removed. Her doctor encouraged her to try a round of chemotherapy telling her it would not cure her but it might well slow down the growth of future cancer cells. She did that and tolerated the chemo quite well.

We talked and agreed that she would never go back to the hospital, we would have hospice at home when she needed it, and that was that.

And that gave her two+ years to enjoy her family and do the things she wanted to do before she died, including a trip to Paris with my sister and niece! We talked and agreed that she would never go back to the hospital, we would have hospice at home when she needed it, and that was that. In the last three months of her life, things slowed down considerably and yet, she didn’t feel she needed us to call hospice yet. When the pain came on a daily basis, I said I thought it was time to call. She seemed reluctant but agreed. They started to visit on Thursday and on Saturday; two days later, she woke up struggling to breathe. Hospice came in 15 minutes with oxygen; she was more comfortable but I called my three siblings who arrived from around the country that night.

The next morning she knew we were all there, and she relaxed and slowly lost consciousness with plenty of pain medication and oxygen. My cousin, her favorite niece, came and played the Elgar on the cello for her. She died on the following Thursday. My siblings and I shared the time together with her and each other — it was her last gift to us.

Ruth Wooden, who was president of Public Agenda, an opinion research and public engagement organization, from 2003 through 2010 and now serves on its Board of Directors. She also serves on the boards of Civic Ventures, the Family Violence Prevention Fund, Teachers Count, Independent Sector and Demos.  Wooden’s past experience includes her roles as Executive Vice President and Senior Counselor at the international public relations firm of Porter Novelli and president of The Advertising Council, the nation’s leading producer of public service announcements. She is currently studying at the Union Theological Seminary.