About Us > Ellen Goodman 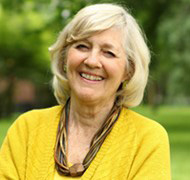 “We talked about everything except one thing: how she wanted to live at the end of her life.”

My mom was one of those people who could talk about your problems until you were bored with them. We talked about everything except one thing: how she wanted to live at the end of her life.

I realized only after her death how much easier it would have all been if I heard her voice in my ear as these decisions had to be made.

Once or twice when we heard about a relative or friend who was comatose or on a feeding tube, she would say, “If I’m like that, pull the plug.” But, of course, when the time came there was no plug.

In my mom’s last years of life, she was no longer able to decide what she wanted for dinner, let alone what she wanted for medical treatment. So the decisions fell to me. Another bone marrow biopsy? A spinal tap? Pain treatment? Antibiotics? I was faced with cascading decisions for which I was wholly unprepared. After all the years I had written about these issues, I was still blindsided by the inevitable.

The last thing my mom would have wanted was to force me into such bewildering, painful uncertainty about her life and death. I realized only after her death how much easier it would have all been if I heard her voice in my ear as these decisions had to be made. If only we had talked about it. And so I never want to leave the people I love that uneasy and bewildered about my own wishes. It’s time for us to talk.

Ellen Goodman has spent most of her life chronicling social change and its impact on American life. She was one of the first women to write for the oped pages where she became, according to Media Watch, the most widely syndicated progressive columnist in the country. After Ellen began her career as a researcher for Newsweek magazine, she was a reporter for The Detroit Free Press in 1965 and two years later came to The Boston Globe where she began writing her column in 1974. In 1980, she won the Pulitzer Prize for Distinguished Commentary. She won many other awards including the Ernie Pyle Award for Lifetime Achievement from the National Society of Newspaper columnists. She is the author of seven books.